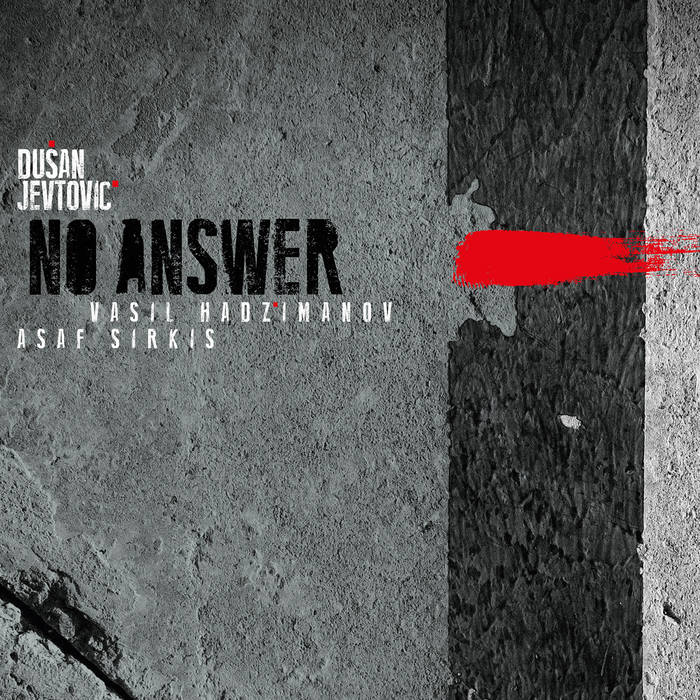 freejazzy An adventurous trio (sometimes a duo or a single) with a range from delicate to brute. No bass. No double or electric bass to be more precise. You either hear the low frequencies of guitar or piano or in some cases :) a moog synth ! The drums provide a creative texture and are something else. Favorite track: Frusci.

The inspired pairing of guitarist Dusan Jevtovic and pianist Vasil Hadzimanov, mobilized by the convincing playing of Asaf Sirkis on drum kit, has resulted in a sound that cross-pollinates the most forward thinking aspects of progressive music with the excitement of post-jazz. Think ECM record label vibe filtered through Radiohead played at an intimate after-hours jazz venue and you’ll catch the vibe. Choosing to work without a bass player opens new dynamic possibilities and allows the guitar and keyboard voicing to dance and weave in a textural ballet. Vasil’s beautiful arpeggiated piano serves as delicate counterpoint to Dusan’s raw textured playing. Asaf alternates between the delicacy of Jon Christensen and the driving power of vintage Billy Cobham. Mini Moog bass brings a powerful bottom end for Jevtovic’ soaring acrobatics and reinforces Sirkis' driving grooves. As with the very best instrumental music, there is a lot of careful listening, creative comping, and building off the other players’ energy, resulting in a music that is at once confident, inspired and original. Dusan Jevtovic' second international release (his third) on the New York progressive jazz label MoonJune might be his groundbreaking work which will intrigue fans of guitarists such as John Abercrombie, John Frusciante, Terje Rypdal, David Torn, Nels Cline, and Jimi Hendrix.

Dusan Jevtovic is Serbian guitarist based in Barcelona, Spain since 2003, and has released two solo albums: On The Edge" (2009, L'Indi, Spain) and Am I Walking Wrong? (MoonJune, 2013), and has recorded and toured with a vast arrays of International artists such as Xavi Reija, Tony Levin, Gary Husband, Asaf Sirkis, Vasil Hadzimanov, Marko Djordjevic, Xavi Reija, Bernat Hernandez, Markus Reuter, Rafa Pons, Rim Banna.

All songs composed and arranged by Dusan Jevtovic.

Video The Place With a View:
www.youtube.com/watch?v=fVfiNKKaFv4