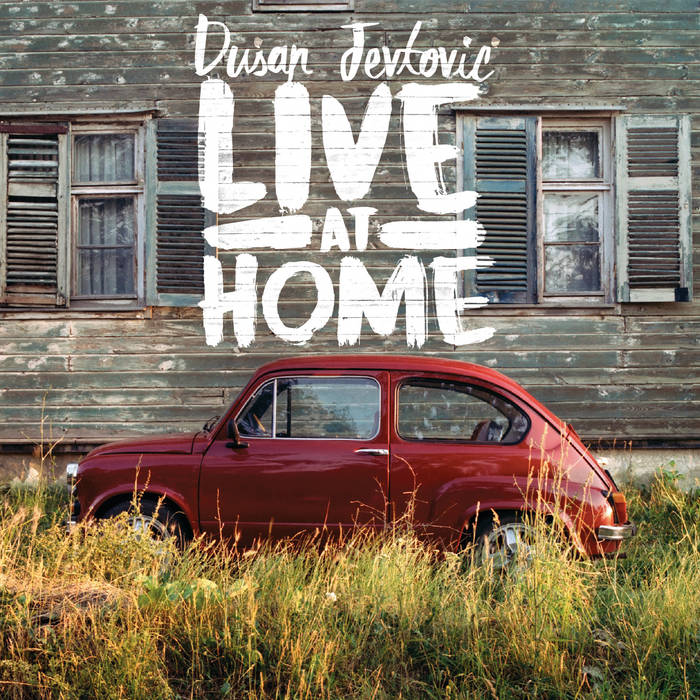 LIMITED EDITION CD, only 200 copies available for sale, in addition to HD Download. Made possible with the generous support of SKC (STUDENTSKI KULTURNI CENTAR) KRAGUJEVAC. Released by SKC, for limited distribution and marketing by MoonJune Records.
The proceeds from the album are intended to fund Dusan’s next studio release.

As the name aptly suggests this is a live album and was recorded on the 23rd December 2016 at the Decije Pozorište in Dusan’s home city of Kragujevac in Serbia. The recording is clear and uncluttered and does not suffer from any intrusive audience noise, or unwelcome audience participation.

Live at Home contains a number of pieces that featured on Jevtovic’s outstanding No Answer album. For the live performance, Jevtovic’s is aided, as he was in No Answer, by the renowned Serbian keyboard player Vasil Hadzimanov. The rest of the band on this live occasion are made up of Pera Krstajic on bass and Pedja Milutonovic on drums.

Live at Home leaves little doubt that progressive fusion can be a passionate affair. It is an album that is never sterile, but is teeming with feeling and creative ideas that give it an organic and human touch. It burns energetically and ignites a multitude of senses; it gently serenades the heart, and when dissonance takes place, it seductively caresses the mind.

This is no more apparent than in the delightful melodies of Angel, which showcases Jevtovic’s compositional skills in a different light. It is a warmly written love song and is far removed from the explosive guitar playing and ferocious fusion that he is often associated with. It provides an altogether different hue to the boldly expressive colours of the albums instrumental pieces.

The music goes way beyond any normally defined parameters associated with fusion. This creates an album that is often exhilarating and challenging in its complexity. Technically excellent playing is combined with musical structures that enable boldly creative developments and well thought out embellishments to take place. Live at Home is a release that is able to take the listener through a range of moods and emotions. It combines the right mixture of aggression and charming serenity and never ignores the importance of the use of light and shade to emphasise its more explosive parts.

Babe is probably the most progressive piece of the release and highlights Jevtovic’s strengths as a guitarist and as a composer. It merges Serbian folk influences with Jazz fusion and prog. It is crammed with complex rhythms and heavy discordant passages. The cleverly sampled voices of Serbian folk singing at the beginning, middle and end of the piece, give the track an added appeal and provide a real sense of heart thumping human energy and genuine ethnicity.

Jevtovic’s outstanding guitar parts wail, moan and often erupt in rage. His solos are engaging and the use and careful selection of a range of effects is never predictable or inaccessibly flamboyant. Jevtovic combines unnerving ferocity with passages of measured subtlety. His sparkling contribution is easy to appreciate and difficult to ignore.

Vasil Hadzimanov contribution is equally important. His flowing piano flourishes, balm the effect of the metallic impact of Jevtovic’s abrasive guitar tones. This juxtaposition between the sweetness of his playing and the harsh distorted tone that Jevtovic often utilises, lies firmly at the heart of much of the albums appeal.

There are numerous heavy and intense moments that are garlanded and sweetened by a bouquet of colourful world influences. Hadzimanov ‘s tune that is entitled Briga, is full of Balkan folk influences and is bedecked by keyboard parts that are equally as expressive as anything that Josef Zawinul, or Chick Corea might have played with Weather Report, or Return To Forever. The use of sampled vocals adds to Briga’s engaging and unusual wide palette of sounds. In this piece, you can almost taste the freedom of expression and clear empathy between the players that lies at its heart.

The live performance captured in this release, gives an opportunity for the listener to experience something that is organic; pulsating with life and flavoured with a pungent capricious essence.

It is clear that the performing musicians have great empathy with each other. The band has great confidence in the quality and strength of the compositions. The players are able to take the basic components of each piece and surf on a froth free wave of improvisation. This creates a truly outstanding live performance and a totally satisfying album.

If you enjoy edgy tunes flavoured with lavish amounts of unpredictability and filled with accomplished playing; Live at Home is sure to delight. It is an album that rewards intensive and repeated listens, fresh and progressive.
credits
released January 1, 2018

***** "Live at Home" comes across as quite the successful production. It showcase perfectly the skills of the band as a live unit, and that the material functions well also outside of a studio environment. A good place to start if you want to get familiar with the music of Dusan Jevtovic, and a CD to take note of for fans of jazz fusion and jazzrock.*****
www.progressor.net

****This is Dusan Jevtovic’s best album yet. There are plenty of excellent jazz fusion solos backed by a very elastic and interesting rhythm section, plus there is also Dusan’s dark heavy psychedelic sounds too. Looks like he has found a way to balance his different interests.****
Jazzmusicarchives

**** It's an album where the musicians seemingly play the right notes, sans any extraneous dabbling, tinkering or excessive soloing jaunts. Even the improvisational segments are devised on purposeful storylines that often encircle a given theme, largely set upon progressive rock and distinguished keyboardist Vasil Hadzimanov's harmonious voicings and jazzy hooks.****
AllAboutJazz

*****The musicianship is some of the best you'll find throughout, though, making this a consistent and impressive journey.*****
MusicStreetJournal

****Put on your space helmet for this trip into the atmosphere.****
JazzWeekly