Am I Walking Wrong 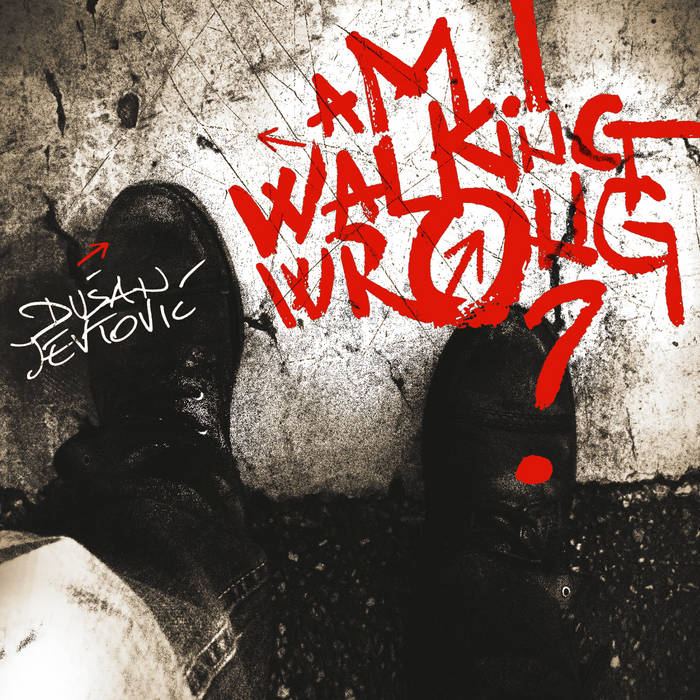 freejazzy This is dynamic and narrative and sensitive trio music. Full of unexpected ideas and sounds. Love the spirit. Favorite track: Embracing Simplicity.

The spectacular international debut of Serbian born and Barcelona (Spain) based guitarist, Dusan Jevtovic, is an edge-of-your-seat thrill ride, full of twists and turns that you never see coming. Am I walking Wrong? showcases moments of immense raw, explosive power, interspersed with swatches of playful dissonance, contemplative ambiance, riveting r'n'b-tinged grooves, authoritative rock vamps, and more. The tight, abundantly-capable trio confidently stride through an engaging set of original barn-burners that are as catchy and accessible as they are spellbinding and unpredictable. Dusan wastes no time in making it clear that he is a vastly accomplished player, with a host of brilliant tones in his arsenal. Armed with a vocabulary most players would kill for (Oz Noy or John Frusciante meets Robert Fripp, maybe? ...), this session cooks on high heat, providing fans of stellar guitar work – especially the die-hard "tone freaks" out there! – plenty of choice morsels into which to sink their teeth. Continually pushing the envelope throughout a set which features a stream of unique, intrigu- ing compositions, Jevtovic delivers the sonic goods with a style and flair that is mesmerizing; and his technique is flawless. Throughout this most enthralling of efforts, his axe work is anything other than what you might expect, but always brilliantly conceived and brilliantly executed. There are a ton of surprises lurk- ing – and they're all good!

Despite the songs' innate complexities and genre-blurring proclivities, his backup never fails to perfectly compliment affairs. (...and in terms of musical stylings, they cover a lot of ground here.) Clearly, this is Dusan's show, but wherever he ventures – and venture he does! – his band is always right there: perfectly in step with him. The structures and themes featured on this album are refreshingly unorthodox, sophisticated and compelling. The group handles tight corners effortlessly, and maneuvers assuredly around whatever obstacles get throw into their path. (...and, in that regard, there never seems to be a shortage: these guys just don't sit still for very long!) Odd time signatures, sudden mood swings and radical changes of direction abound, but all are handled with an unshake- able grace and radiant poise. Without question, this is a group of highly-skilled musicians with tremendous chemistry who aren't afraid to frolic anywhere; nor are they even the slightest bit hesitant or intimidated by any such prospects.

On this album Dusan Jevtovic is accompanied by Catalan fretless bass guitarist Bernat Hernandez (a well known on the local jazz and pop scene in Barcelona), and Serbian drummer, based in New York, Marko Djordjevic (“world class drummer” and “a true innovator”, as quoted by Modern Drummer Magazine, who has played on over 40 albums and has thousands of live performances to his credit with Matt Garrison, Wayne Krantz, Jonah Smith, Garry Willis, Bill Frisell, Lionel Loueke, Aaron Goldberg, among others, and who leads his own jazz band SVETI. Marko Djordjevic has recently joined other two NYC based musicians: Beledo on guitar and Clint Bahr, formerly of TriPod on 12-strings bass guitar, for another MoonJune’s project THE PLEBS, to record their debut album in early 2014.)

Dusan Jevtovic will actively tour in 2014 in Spain, territories of the former Yugoslavia, occasional festival in Europe, and above all, a short tour of the North-East USA with some new exciting recordings with NYC based musicians.
credits
released June 30, 2016

Video In The Last Moment:
www.youtube.com/watch?v=mTJ5CfbPNs8

- The hilarious musical prose in the guitar of Dusan Jevtovic, trace roads, trails leads, breaks down and builds up, sponsored by horizons. sharpening as swordsman of musketeer, its instrument smite me pointedly and win battles. iIs density is flirting with the rock jazz and taken by surprise with their strong ideas. in his music the spirit does not raise but that is tearing apart. ….The power of transformation of Dusan Jevtovic with his guitar conquest the revelation of the ecstasy. " Embracing Simplicity " is the flow of the moment infinitely generous, the balance without embarrassment, the diction of the ropes contemplating its quiet landscape. This is the fascination of those who possess natural delirium and peace, united by the fullness of his execution... Gustavo Bustamante
Jazztimes

-"...Is it art-rock? Noise-rock? Jazz? Metal? It’s elements of all that, but more than anything, it’s its own animal, which makes it so interesting..."
New York Music Daily

- Jevtovic and his trio play a very heavy form of rock that mixes a grunge like sound with solos that are almost more about texture than rapid scale runs. That’s not to imply that Jevtovic and his crew lack technical skills, these guys know how to play, but they just approach things their own way. Music Archives

- His music is a hotbed of eclectic energy otherwise oppressive enough heartbreaking. A "power trio" quite so overwhelming!
Culturejazz France

- Of course, there's plenty of the latter to be had on Am I Walking Wrong?. But it all fits together in a very original and individual fashion, making Jevtovic's voice immediately recognizable. His basic playing style is well off into the edgiest provinces of jazz-rock and progressive rock as purveyed by artists as diverse as Terje Rypdal, Nels Cline, and Raoul Bjorkenheim. Dave Wayne for
AllAboutJAzz.